Once you decide to start your own venture you know you need to prepare yourself by learning everything you can about the field you’re entering. But don’t forget that you also need the essential know-how about actually running a business. You don’t have to put things on hold while you further your education along those lines because you can apply for an MBA before graduation. You’ll broaden the general scope of your knowledge and gain new tools for effective communication, analytical thinking, and creative problem-solving that will be invaluable as you grow your business.

Beyond the research and book learning, though, to be a successful entrepreneur takes self-confidence, ambition, a solid work ethic, and the motivation to keep driving toward your goal even when obstacles get in the way. You’ve got to have the determination to get up every morning and go at it because, even on the days when you’d like nothing better than to pull the covers back over your head, no one is going to do the job for you if you don’t do it yourself.

Fortunately, a lot of others have gone before you to create their own successful (and mega-successful) businesses. When you need a boost, let their words support and motivate you:

“The way to get started is to quit talking and begin doing.” –Walt Disney

“When you find an idea that you just can’t stop thinking about, that’s probably a good one to pursue.” -Josh James, Co-Founder of web analytics company Omniture and software company  Domo

“You shouldn’t focus on why you can’t do something, which is what most people do. You should focus on why perhaps you can, and be one of the exceptions.” -Steve Case, Co-Founder of AOL

“The important thing is not being afraid to take a chance.” -Debbi Fields, Founder Mrs. Fields Cookies

“What do you need to start a business? Three simple things: know your product better than anyone, know your customer, and have a burning desire to succeed.” -Dave Thomas, Founder of Wendy’s

“The critical thing is getting off your butt and doing something. It’s as simple as that. A lot of people have ideas, but there are few who decide to do something about them now. Not tomorrow. Not next week. But today. The true entrepreneur is a doer, not a dreamer.” -Nolan Bushnell, Founder Atari and Chuck-E-Cheese’s

On What It Takes to Be Successful 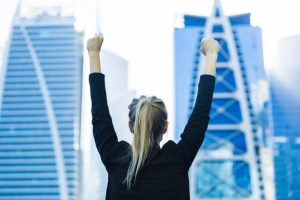 “If you want to be an entrepreneur, it’s not a job, it’s a lifestyle. It defines you. Forget about vacations, about going home at 6 pm – last thing at night you’ll send emails, first thing in the morning you’ll read emails, and you’ll wake up in the middle of the night.” -Niklas Zennstrom, Founder of Skype

“I am convinced that about half of what separates the successful entrepreneurs from the non-successful ones is pure perseverance.” -Steve Jobs, Co-Founder of Apple

“If you’re passionate about something and you work hard, then I think you will be successful.” -Pierre Omidyar, Founder of eBay

“I never took a day off in my twenties. Not one.” -Bill Gates, Co-Founder of Microsoft

On Dealing With a Setback

“I knew that if I failed I wouldn’t regret that, but I knew the one thing I might regret is not trying.” -Jeff Bezos, Founder of Amazon

“Don’t worry about failure, you only have to be right once.” -Drew Houston, Co-Founder of Dropbox

“Don’t let the noise of other people’s opinions drown out your own inner voice. Have the courage to follow your heart and intuition. They somehow already know what you truly want to become. Everything else is secondary.” -Steve Jobs

“Don’t play games that you don’t understand, even if you see lots of other people making money from them.” -Tony Hsieh, CEO of Zappos